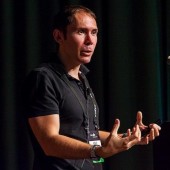 Azat is the founder of Node University and...

⌨ is the most active GitHub contributor in the world right next to Paul Irish, Addy Osmani, Todd Motto, and other famous developers (source: https://gist.github.com/paulmillr/2657075);

📚 wrote 14 books on Node and JavaScript among which is the book that was #1 on Amazon for "node.js" and now is open&free on GitHub: https://github.com/azat-co/practicalnode;

🎓 has free and paid courses on Node University: https://node.university.

We'll talk about five core Node features which most developers who write Node or use it in front-end don't know about.